Just over the road from the historic Pantiles is one of the few buildings permitted to exist on The Common, and one with an interesting history.

The Forum, Music and Arts Centre, sits on “Fonthill” which is rumoured to be the site of the cottage occupied by Mrs Humphreys, who served Lord North with a glass of chalybeate water as he rode through the area in 1606. In fact, look closely by the main road and you will see an ancient spring and cold bath, both now protected by railings.

Originally a forge, this business expanded to include coach and carriage works. Space was also lent to the Town Fire Corporation. The family cottage extended into a boarding house.

The current building on this site was built in 1939, opening in late May, just months before World War Two. It replaced several old buildings that had evolved over two hundred years. 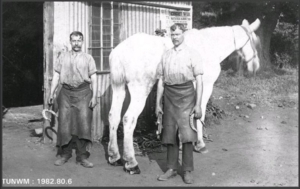 This rustic collection of buildings was eyed up by the Borough Council in 1918 as a potential site for public conveniences, something very important in tourist towns of that era.

Many lengthy council meetings later, and in 1931 the site was finally purchased from the Manor of Rusthall.

Original plans were for modernising the old buildings, but by 1938 it was agreed to demolish and rebuild.

The Fonthill Restroom had a large central space, with arched doors, to sit and look out at The Common, plus Ladies and Gents toilets, with attendants. Local events, and bus times, were all advertised here on a board.

The next piece of history is rather vague, but can only be assumed that changing times, with the advent of the motor car, made Restrooms on The Common less essential.

Within living memory people do recall visiting the toilets after The Funfair on The Common, or to wash hands after blackberrying, and for a time in the 1980s the building was let out and used as a Brass Rubbing Centre. Possibly the 1980s renovations in The Pantiles’ Corn Exchange, with toilets, finally made Fonthill Restroom redundant.

It was empty in 1993, when a group of school friends took it on. Having already hosted live music gigs around the area in assorted halls, pubs and hotels for five years “The Rumble Club” was looking for a permanent home.

Fonthill has served them well for the past 25 years! A basic conversion in a fortnight changed the restroom into a grassroots music venue. Since then The Forum has played host to a wide range of acts, from music to comedy, theatre, film and art, as well as meetings, parties and weddings.

With a total capacity of 250 it has been on the touring circuit for many acts in their early days – Green Day, Oasis, Coldplay, Biffy Clyro and Adele are among the thousands who have played here.

Access to quality music has encouraged many locals to take up playing instruments and form bands – amongst those gaining success are Everything Everything, Slaves and Lady Bird.

The venue continues to attract national praise, and acts – just in 2018 shows for the Silver Anniversary have included Pale Waves, Frank Turner, Spring King and Ash. 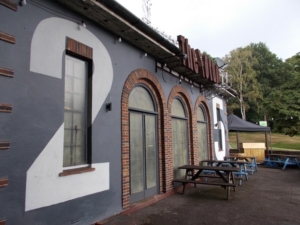 As well as shows at the venue, Forum staff and volunteers are involved in many other events around Tunbridge Wells. The most significant is the annual arts and music fringe festival UNFEST – based at The Forum but including pop ups around the town. Expect art, theatre, spoken word and a wide range of music in unexpected places depending on the curators, every late May Bank Holiday weekend!

The spirit of UNFEST carries on during the summer, with The Forum open most Sunday afternoons for music, food and pop up activities. These free afternoons are a good introduction to the venue, running from late May until Heritage Open Days in September.

The Forum also helps outside producers, for example in 2018 Forum staff assisted Blackdeer Festival to introduce local elements to their Americana Festival, the start of a long term working relationship.

2017 saw Tunbridge Wells host its first ever PRIDE march, and The Forum became the base for the day’s activities, just one of many community events the venue supports.

Shows are advertised, and advance tickets available, on the website twforum.co.uk – which also includes information on parking, accessibility and hire.