You may or may not know but I’m pretty passionate about living in Tunbridge Wells and feel that we are very lucky to live in such a lovely place. Although I could tell you where the best place is for brunch or my favourite shop for birthday gifts, my historical knowledge of the town is definitely lacking. 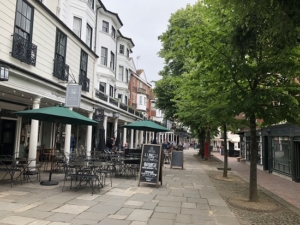 So after hearing about the twice weekly guided tours hosted by the Blue Badge Guides, I decided that it was high time for me to take part in an official tour and learn more about this fascinating place.

The tours are run for groups who book in advance and start at the Tourist Information Centre located in The Corn Exchange on The Pantiles. They cost just £5 per person (min £75 per group) and they usually last around an hour. Alison Finlay was our guide on the particular day and I was blown away by her in-depth knowledge of the town’s history as well as her ability to make everything sound interesting, with a welcome sprinkling of humour thrown in. As an official Blue Badge Guide she went through rigorous training to quality and in my opinion, she was made for the job! 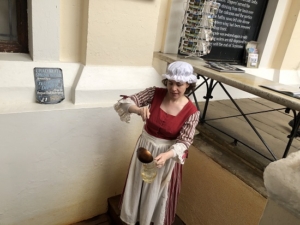 We started off by being shown an original ‘pantile’ made from heavy Wealden clay – a large slab which used to pave the ‘Upper Walks’ which is now part of what is known as ‘The Pantiles’. There aren’t many of them in existence today and it was interesting to see where the name of ‘The Pantiles’ originated from.

Alison pointed out the three original 17th century houses on The Pantiles which have been lovingly maintained and presented us with lots of fascinating facts on our way to the Chalybeate Spring where there was a ‘Dipper’ in original dress serving spring water to passers-by. 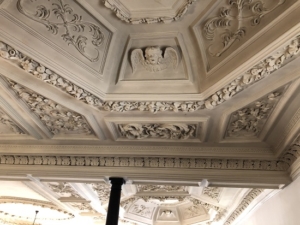 A tour around the beautiful King Charles the Martyr Church was a highlight for me too – Alison shared several stories incorporating the church’s past and its Royal connections, including a sculpture of Mary which is rumoured to have the face of its designer’s mother. Try to spot the little umbrella stands if you go along there too and have a look in detail at the faces of the little cherubs which are carved into the ceiling on the upper level! 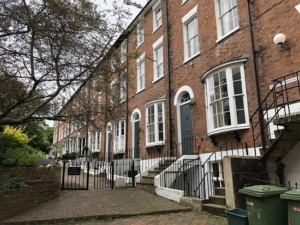 We continued the tour around Chapel Place and onto Mount Sion, ending up walking down the charming cobbled ‘Frog Lane’. Did you know Le Petit Jardin has the biggest sash window in Western Europe? Have a look next time you’re passing! 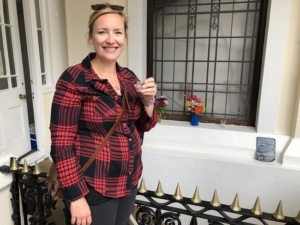 Outside Max Oliver’s Hairdressers, we stopped to have a look at the strip of blocks (that say blockleys on them) which once marked the divide between Kent and East Sussex! This was particularly relevant at one of The Pantiles drinking establishments which adhered to Kent licensing laws on one side and East Sussex licensing laws on the other. The customers had been known to spend the remainder of the evening on one side which had longer opening hours! The divide has since been moved much further up the Frant Road!

The Guided Tour is excellent value at just £5 and whether you are a long-standing resident, new arrival or just visiting, it is well worth it. Thank you to Alison for a marvellous morning – I am keen to take my Mum along next time, as I’m sure she would enjoy the tour too.

by Clare Lush-Mansell / My Tunbridge Wells

To take part in a tour, simply contact the Tourist Information Centre in The Corn Exchange to book a group in.