Haysden Country Park covers an area of about 65 hectares (160 acres) including a range of habitats such as river, grassland, freshwater lakes, marshland and woodland, all dog friendly.

Grosvenor and Hilbert is one of the town’s oldest public parks designed by the renowned Victorian landscape architect Robert Marnock in 1889. It still contains original historic features, such as Marnock Lake and the grottoes or ‘dripping wells’. There is an exciting and challenging play area which is well worth a visit. This play area was updated in 2015 thanks to Heritage and Big Lottery Funding.

The park can be accessed for free from several entrances, the main ones being from Auckland Road, Upper Grosvenor Road and Hilbert Road. It is just a short walk or cycle from both the town centre and High Brooms train station. It is also on the 281 Bus route.

Facilities at Grosvenor and Hilbert Park include: a large play area, a café, an ornamental lake, a bowling green, a hireable community Hub, two full size grass football pitches, a kick around area marked for 5-a-side football and basketball, and public toilets. There is an exciting wheeled sports area located here too suitable for skateboards, BMX bikes and rollerblades.

The bowling green has been used by Grosvenor Bowls Club for over 100 years and is bookable in advance.

The park is home to a large variety of wildlife, which can be found within the wilder areas of the park, such as the Ancient Woodland, wetland area and community orchard. The wetland area now has a fantastic new boardwalk through the middle, complete with dipping platforms. The community orchard comprises of 89 fruit trees and is managed by the Friends of Grosvenor and Hilbert Park. Hilbert Woods is designated a Local Nature Reserve and is managed by Kent High Weald Partnership. Chalybeate (iron-rich) streams run through the park, turning them an unusual rusty red colour. This is the same water that rises in the Pantiles and made Tunbridge Wells famous. 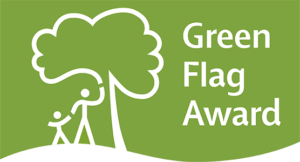 Discovered over 400 years ago, by Lord North who felt rejuvenated from drinking the cool water, The Chalybeate Spring is situated in heart of the historic Pantiles.

The Chalybeate spring water was served by someone called a ‘Dipper’ for a small fee – not for the water, which has always been designated as belonging to the people, but for being served the medicinal solution in a genteel fashion. This tradition carries on today when circumstances allow. Usually in the summer it can be possible to sample the cool Chalybeate Spring water served by a costumed dipper, provided the water is flowing, it is a natural phenomenon after all!

The spring and is open to admire 24 hours a day, 7 days a week. Please check about whether water is being served before making a special trip, by contacting the Tourist Information Centre.

After taking the water, you too can adjourn to a local café or inn and partake of further refreshments then perhaps some shopping in the delightfully historic alleyways of The Pantiles.

Calverley Grounds is a lovely landscaped park of gardens located in the centre of Royal Tunbridge Wells.  It boasts attractive lawns and ornamental gardens, including an Italianate garden.

This beauty spot has played host to a number of much loved annual events including the Mela, The Royal Tunbridge Wells Food Festival and the hugely popular Winter ice rick and venue SKATE.

There is a welcoming café which is open throughout the year serving ice creams, drinks and hot and cold food, all reasonably priced.  There is indoor and outdoor seating available.

There are toilet facilities near the Mount Pleasant entrance to the park.

The Tunbridge Wells Circular Walk is a 27.5 mile (44.3km) route that explores the variety of fertile and beautiful countryside around Royal Tunbridge Wells, a town within the High Weald Area of Outstanding Natural Beauty on the borders of Kent and East Sussex.

The walk starts and finishes wherever you like. To illustrate you could start at Southborough Common, passing through a number of picturesque villages in the Tunbridge Wells area: Southborough, Pembury, Frant, Groombridge and Speldhurst. The route is of interest for natural history, archaeological, historical and architectural features.

Walk past vineyards planted in 1884 and saunter through orchards growing apples, pears, plums and cherries.

Notable attractions along the way include:

All Saints’ Church, Tudeley is a fascinating building dating back to the 11th century which is listed in the Domesday Book. The stain glass windows also hold great significance, having been designed by Franco-Russian artist Mark Chagall, who was described as “the quintessential Jewish artist of the twentieth century” by art critic Robert Hughes.

In Snipe Wood lies the site of Keyes Mill, a water mill that was painted by the globally acclaimed artist J.M.W Turner on two occasions in 1795 and 1796.

Harrison’s Rocks is a spot frequented by serious climbers being the largest of the cluster of local southern sandstone outcrops. The site has been visited by tourists since the 18th century and still remains popular.

Groombridge Place and Gardens is another gem along the Circular Walk. The Manor House has an intriguing history, whilst the formal Gardens are beautiful to walk through.

Tunbridge Wells Common is a few minutes walk from the town centre and famous for sandstone outcrops known as Wellington Rocks. It is a wonderful space to relax and observe the world, or you could finish your walk with a picnic in a delightful spot.

Dunorlan Park is also a great stop receiving a steady stream of visitors thanks to its beauty and serenity. The Park is Grade II listed as part of it was landscaped in the 1860s by distinguished Victorian gardener, Richard Marnock. Marnock was commissioned by Henry Reed, a local millionaire owning 78 acres of garden that now make up the Park.

The Park is also the proud owner of a Green Flag Award (since 2006) making it “a welcoming green space, healthy, safe” and “managed in an environmentally sensitive and sustainable way”.

If 27.5 miles is too strenuous, the route can be divided up into four waymarked circular link routes: Southborough Circular – 8.5miles, Pembury Circular – 13miles, Sussex Circular  – 15miles and Speldhurst Circular – 10miles. Each trail starts in the middle of the royal town within reach of local bus services and the railway station.

Leaflets containing maps and directions for each of these trails can be downloaded or obtained from the Tourist Information Centre.

The Tunbridge Wells Museum & Art Gallery originally dates from 1885.  Whilst the 1950s building is closed for redevelopment some collections are displayed in the Library’s temporary premises at Royal Victoria Place shopping centre (level 1, opposite Fenwick and Muffin Break).  Displays explore the themes of Tunbridge ware, the High Weald, Subbuteo, scientific and political innovation, and Tunbridge Wells as the first holiday resort in England.