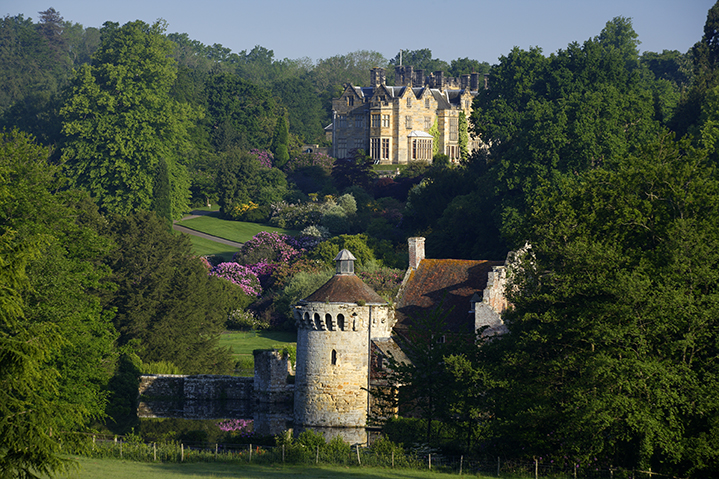 Although the earliest records for Scotney go back to 1137; it was not until 1378 that the Old Castle was built in response to the attacks and raids that were being perpetrated by the French against the local population. The medieval castle fell into decline and today all that remains of the original building is the south tower.

Acres of seemingly wild and uncultivated mature gardens tumble down the hillside to the lily-strewn moat, where the ruins of the Old Castle sit serenely surrounded by water among tranquil woodland glades.

In the 16th century, an Elizabethan Manor house was built by the Darrell family, which integrated the sole remaining tower.

During the reign of Queen Elizabeth 1st, when the Church was moving toward Protestantism, the Darrell family took a huge risk by concealing  Catholic priest Father Richard Blount, for seven years in a secret chamber. Father Blount survived in hiding and eventually died in London in May 1683.

Ultimately, the manor house fell into decay and was abandoned.

In 1778 Edward Hussey purchased Scotney and commissioned architect Anthony Salvin, to design and build a new house using the sandstone that was available in the grounds.

The family remained in residence until 1970 when Christopher Hussey left the estate to the National Trust.

Some of the rooms in the house were opened to the public for the first time in 2007, these rooms have been kept more or less untouched, each one containing personal possessions belonging to the Hussey family.

In the gardens the snowdrops and daffodils provide the first early splash of colour after the dark winter. From late April until mid May is the best time to take a stroll through the magnificent profusion of vibrantly coloured rhododendrons, azaleas and kalmia.

The summer months of June and July are for fragrance and scent when the copious rambling roses and wisteria perfume the air. Assorted herbaceous boarders are awash with colour throughout the year.

In autumn it’s all change as the foliage transforms into a kaleidoscope of bright copper, orange, red and gold.

The 780 acre estate can be explored all year round, using the trails and footpaths that cross the property, dogs are welcome to join in with the rest of the family. Cattle and sheep graze the grounds so although a dog friendly attraction, please keep your hound under control.

Over 300 acres of the estate is covered in ancient woodland which is home to native woodland wildlife. No matter what the season, it is possible to enjoy nature’s treasures all year round.

Leave time for some family fun as young explorers let of steam in the natural play area with its drum kit, play house and mud kitchen. If they are still looking for adventure organise a search party to find the iguanodon footprint!

Did you know that Scotney has the only working hop farm in the National Trust? The hops are used to produce Scotney Ale and Scotney Bitter. Why not visit the shop and pick up a bottle or two to take home with you as a momento of a great day out.