We have been on a mission to seek out the best local National Trust properties for families and visited Scotney Castle during October Half Term. I had been advised by several people that this was a good place to visit with kids, so was intrigued to see if it would live up to my expectations. 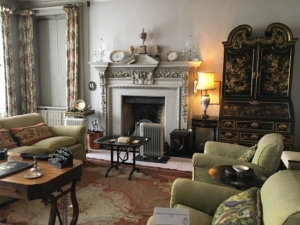 Located just outside Lamberhurst, up a long and winding driveway, Scotney Castle dates back to an incredible 1137. Tickets to look around the house are given on arrival, and we decided to go for the next slot, meaning we were able to start our tour just a few minutes after getting there. There was a quiz for the children to take around the house, keeping my six year old occupied at least for a while!

I found the house itself fascinating. It opened to the public in 2007, not long after Betty, the last owner, had passed away.  It feels as though everything has been kept pretty much the way it had been – with ornaments, trinkets and books adorning each room. The bright master bedroom with a double aspect of the beautiful grounds was probably my favourite room and we even spotted Betty’s cat in the kitchen which the boys made a beeline for! 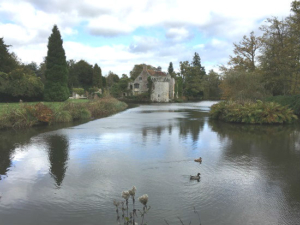 As we visited close to Halloween, there was a pumpkin trail taking place throughout the grounds. The boys sped along the pathways looking for clues and although we weren’t successful with finding the last two pumpkins, we had a guess at the two missing words and luckily they were given their very ‘sweet’ prize at the end. 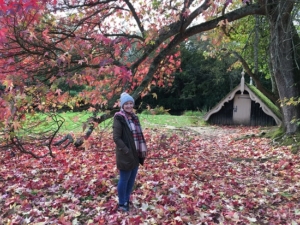 The autumn colours on many of the trees and leaves were just stunning and although the house had been fairly busy, it felt very calm and peaceful as we strolled around the gardens. There are lots of different routes to take, and it is fairly easy to cover most of it even with two young kids. The main route is approximately two miles long.

The castle ruins, surrounded by a moated lake, were another highlight and my eldest son was captivated by the little door behind which Father Richard Blount, S.J. was hidden while he ministered to Roman Catholics in the late 1500s. 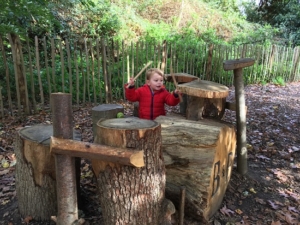 We saved our visit to the Badger and Pepper play area (named after previous owners’ dogs) until last and the boys had great fun playing with other children launching tennis balls down the giant marble run. The whole play area has such a distinctly natural feel to it with a mud kitchen, natural drum kit and play house too. Look out for the tree swings and den building while you’re there as well!

I love that the National Trust properties are now providing facilities like this for families and could see myself going back there again and again.

There’s a lovely cafe and gift shop at Scotney Castle too, but we needed to get home for a much needed nap (my son, not me!) so headed back before we had a chance to visit. Maybe next time!