It was a Friday afternoon, my Mum was over from Ireland for the week and I was collecting my husband from the train station in Royal Tunbridge Wells – this was no ordinary Friday though, as we were about to have our first night away from the kids for a very long time!

We would be spending the night at The Spa Hotel in Royal Tunbridge Wells and let’s just say I had been looking forward to this for a long time!! Keen to ensure we didn’t waste any time, I left my house at 4pm, picked up my husband from the station and checked in to our beautiful room (more about that later) before enjoying the facilities of the spa by 4.45pm – the absolute beauty of staying somewhere close by.

We spent just over an hour in the spa, doing a few laps of the pool followed by a session in the super steam room and in the sauna. Then it was back up to our room to enjoy a bottle of bubbly before dinnertime.

Our room was on the third floor of this stunning period hotel. It was completely different to what I was expecting and had a contemporary but luxurious and incredibly tasteful feel to it. The furniture and accessories were like something straight out of a glossy magazine and the carpet was the thickest most magnificent thing I had ever laid my feet on.

A gorgeous oak sleigh bed dominated the main bedroom while there was a charming chesterfield style sofa in the sitting room area with a flat screen TV in each of the rooms. The bathroom was spacious, had a very fresh feel to it and all in all, we were impressed. 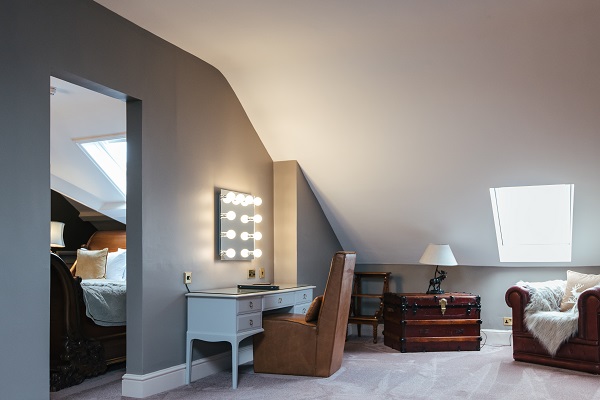 Enjoying a few glasses of Prosecco while getting ready was even more fun with the Hollywood style mirror at the dressing table. What a novelty spending time doing my hair and makeup without having to rush around trying to put the kids to bed or tidy up the house.

We didn’t have far to go for our meal as we had decided to dine at Zagatos restaurant which has opened recently at The Spa Hotel. I have to admit I had previously had a peep at the menu so had a good idea of what I might have.

We arrived in to a bustling restaurant just as the jazz musicians were setting up for the weekly Friday night jam.

Another glass of Prosecco was a must while we scanned the menu to choose want we wanted. I went for a venison scotch egg with onion mayonnaise to start, followed by a Surrey Hills farm fillet steak and chips. Dave decided on the shellfish cocktail with a twist and although we were aiming to be more adventurous in our choices, he chose to have the steak and chips too. 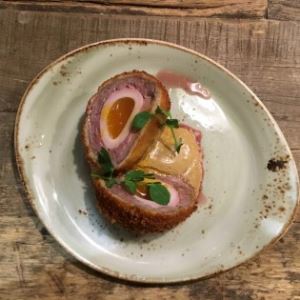 To put it simply, the scotch egg was out of this world!! It was not only presented beautifully but it tasted even better with the egg cooked perfectly and the colours complementing each other. I had asked our lovely waiter ‘Denniz with a Z’ whether I should go for the pâté or scotch egg and I’m glad I took his advice. I’m told Dave’s starter was tasty but I was too busy enjoying my scotch egg to take much notice of his!

I tried a colourful cocktail in between courses and decided on an old favourite – The Singapore Sling. The balance was perfect with a hint of cherry and a sweetness to it which I always enjoy. The mixologist knew exactly what he was doing when be made this tipple and I will definitely be going back there for more. 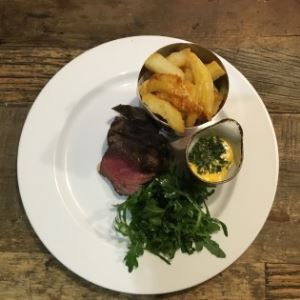 Our steaks with chips arrived and the meat was cooked to perfection – medium/rare ribeye for Dave and medium fillet for me. The chips were thick, homemade and there was just the right amount of them while the steak was a generous portion of high quality meat.

The béarnaise sauce came on the side and complemented the dish well. We worked our way through the main course and polished it all off while listening to the live jazz performance with some classic tunes – the perfect recipe for a relaxing Friday evening.

We contemplated going into Royal Tunbridge Wells after the meal – I mean with no kids to wake us up in the morning and no babysitter to rush back to, we could have really let our hair down…

Or, we could just enjoy some more jazz and enjoy watching the flat screen TV (Dave) / reading a trashy magazine (me) in our hotel suite. It was a no brainer for me! So up we went to our elegant room, satisfied, slightly tipsy and ready for a good night’s sleep. 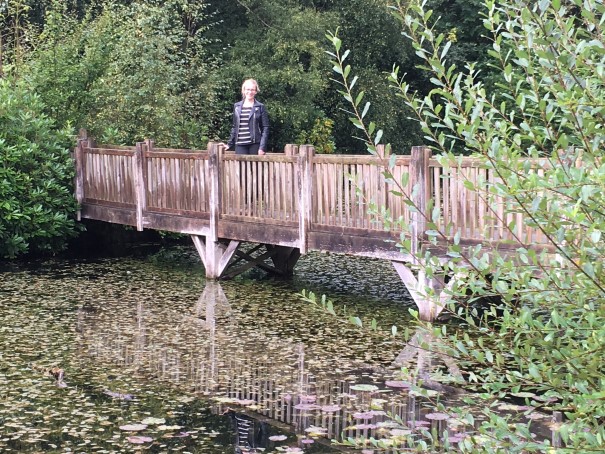 The next morning we had a buffet breakfast at The Spa Hotel’s Chandelier Restaurant – a more formal affair with floor to ceiling windows looking out on the beautiful grounds and a great choice of food from sausages and bacon to scrambled eggs, mushrooms, hash-browns and tomatoes. There were some continental options too including cereals, pastries, fruit, cheese and cold meats. We enjoyed reading the papers in peace before heading out to explore the grounds.

Who would have known there was so much space behind The Spa Hotel? Set on 14 acres of land, we wandered down to a little lake full of water lilies before returning to our room to enjoy our last hour of freedom.

Our stay at The Spa Hotel was everything we had hoped for and more. Zagatos is an absolute gem and somewhere I will be returning to again – perhaps on a girls’ night out this time for some chats and cocktails!

The Spa Hotel has Tunbridge Wells Golf Course behind it and the large Common in front of it, yet is only a 10 minute walk from town.  Spa Spa is on site and offers massages and beauty treatments.

Clare and her husband (Royal Tunbridge Wells’ residents) stayed at the Spa Hotel on Friday 30 September 2016 for one night.