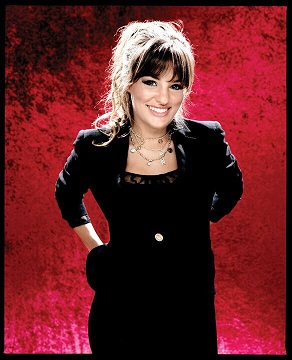 The English Symphony Orchestra return to the Assembly Hall Theatre at 7:30 PM on the 7th of September following their packed house debut in January with a programme of Romantic masterworks featuring superstar violinist Nicola Benedetti.

Benedetti will be featured in the epic and passionate Violin Concerto by Sir Edward Elgar on a programme which also includes Brahms’s Second Symphony under the baton of the ESO’s Artistic Director, Kenneth Woods.

Since rocketing to international fame as the 2004 winner of BBC Young Musician of the Year, Nicola Benedetti has established herself as one of the leading violinists of her generation and one of the most popular and persuasive advocates for music education in the world today. Nicola attracts an enormous amount of worldwide media attention following the various facets of her extraordinary career and her international television appearances have been wide and varied including performing at the Opening Ceremony of the 2014 Commonwealth Games to a live audience of approximately 40,000 and TV viewing audience of 9.4 million people. Her latest best-selling recording is of the new Violin Concerto by jazz legend, Wynton Marsalis.

Benedetti will perform Edward Elgar’s Violin Concerto, one of the most popular and challenging works in the violin repertoire. The work, one of Elgar’s most passionate and personal works, was written for Fritz Kreisler and Elgar later recorded the work with the then sixteen-year-old Yehudi Menuhin as soloist. Menuhin would later serve as Principal Guest Conductor of the English Symphony Orchestra from 1990-99, and would regularly perform and record the music of Elgar with the ESO. It is a work which Benedetti has only recently taken into her repertoire, with the the Telegraph saying of her first London performance of the work “Benedetti’s sense of concentration on the longest violin concerto in the standard repertoire held the hall spellbound.”

Over the last 12 months Nicola has also continued her role as a dedicated, passionate ambassador and leader in music education. She has reached over 1250 young people through workshops, masterclasses, partnership projects, and school visits, providing key moments of inspiration for young instrumentalists, as well as focused, high quality teaching and guidance. Nicola has also connected with over 100 teachers, aiming to support their practice, highlight their essential role in society – especially during a period when many jobs have been under threat – and encourage collaboration and mutual learning. This commitment to supporting the UK’s music practitioners was underlined in July, when Nicola took over as President of the European String Teachers Association.

Complimenting the Elgar is another beloved Romantic-era orchestral masterpiece, Brahms’ Second Symphony, presented here under the baton of Kenneth Woods. Considered by many to Brahms’ most accessible and popular symphony, the work revels in nature inspired lyricism, culminating in one of the most thrilling finales in the orchestral literature.

Based in Worcester and hailed as “The International Orchestra of Elgar Country” the ESO’s recent plaudits include “10 Best Classical Recordings of 2018” from The Arts Desk, “Gramophone Magazine Critics’ Choice Best Recordings of 2017” and “Classical Concert Highlight of the Year” from the Birmingham Post. Of their triumphant appearance at Cadogan Hall earlier this summer, Classical Source said simply “Beethoven’s Fifth Symphony received one of the best recordings I have heard live.”