In my first blog post for Visit Tunbridge Wells, I wrote about five things I love about living in this place. But why stop at five? Here are five more reasons why I think Tunbridge Wells is such a terrific place…. 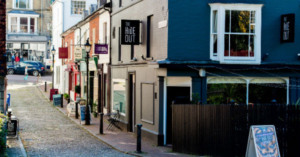 We are lucky to have a marvellous mix of stores at the top end of Royal Tunbridge Wells in and around Royal Victoria Place shopping mall, some quirky places on Camden Road and some beautiful boutiques on The Old High Street right down to The Pantiles.

There are so many shops to choose from but one of my favourite independent shops is Jeremy’s Home Stores which is like an Aladdin’s cave stocking literally anything anyone would want for the kitchen, as well as some toys and trinkets, gifts, home storage and decorations. It’s my go-to shop for most kitchen-related utensils and hasn’t let me down yet!

Trevor Mottram in The Pantiles stocks high quality homeware / kitchenware and is a lovely place to have a mooch around on a Saturday afternoon. The Children’s Salon stocks designer children’s clothes and gifts – although some of them are out of my price range, it’s still nice to have a browse and I have bought some really special gifts in there.

The High Street is one of my favourite places to go in my free time, even if it’s just to do some window shopping – with shops like The White Company, Space NK and Mint Velvet, there is plenty of temptation! Royal Tunbridge Wells is a mecca for shoppers and I can see why people like visiting this town.

Roughly 40 miles from London and about an hour’s drive to the coast, Tunbridge Wells has the best of both worlds in terms of location, in my opinion.

I was surprised at how close the coast was when I moved here and it’s a pleasure to be able to pack up the car on a sunny morning and head off for the day. Some of my favourite seaside towns near Tunbridge Wells to visit are Hastings, Camber Sands and Eastbourne. We have had several fun-filled days out in Hastings which included not only a visit the beach but a ride on the miniature railway as well a visit to the playground and a tour of the The Shipwreck Museum and The Fisherman’s Museum.

Being able to go up to London with relative ease is terrific too, whether it’s to meet some girlfriends for a night out or with the family on a day trip to do some sight-seeing. We are so lucky to be able to enjoy the beauty of the countryside and coast but to also be near such a fantastic city.

#8 A Rich History and Culture 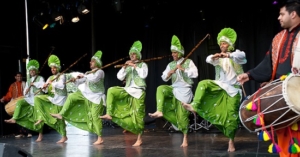 There is a vibrant arts and entertainment scene around Tunbridge Wells – I got my first taste for it when I took part in a community play called ‘The Vanishing Elephant’ a few years ago. I am a regular visitor at the Assembly Hall Theatre, which has a super selection of shows coming up including a visit from two of my favourite comedians – Jimmy Carr and Sarah Millican and a performance of Carmen from The Russian State Opera. Trinity Theatre likewise has a packed programme and a great café plus it often screens some awesome art-house films.

We have also enjoyed going along to big community events including The Tunbridge Wells Puppetry Festival, the annual Mela, Jazz on the Pantiles and the Lantern Parade.

The Tunbridge Wells Museum & Art Gallery is a more recent discovery for me and I enjoy taking the kids to their free craft sessions. 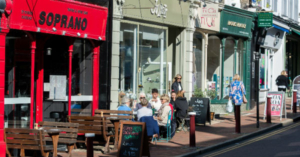 We are spoilt for choice in Tunbridge Wells, with lots of new independent restaurants, hotels and pubs popping up.

Sopranos is super for drinks and something light to eat and if you like Thai food then Sucheera ticks the boxes for me. If steak is your thing, then CAU is the ultimate place for a meat-feast. I’m not normally a massive meat fan and used to request for it to be cooked ‘well-done’ but when I was persuaded to try ‘medium’ at CAU, it was a revelation – medium steaks for me from now onwards!

There are some lovely local countryside pubs too and if I had to pick my top two, they would be The Vineyard in Lamberhurst for their outdoor bar & grill and playground and The George & Dragon in Speldhurst for its beautiful roast dinners.

It’s obvious that I’m a fan of the shops, eateries, facilities and places to visit in and around Tunbridge Wells, but none of this would matter if I didn’t have friends and family to share it with!

When I take my friends and family from Ireland into Royal Tunbridge Wells, they are often impressed by the friendliness of the people and their willingness to help. Tunbridge Wells is sometimes given the nickname of ‘Sunny Tunny’ which I think sums it up well!

With thanks to Clare Lush for this week’s VisitTunbridgeWells Blog. Bookmark this section for the next update in 2 weeks time.