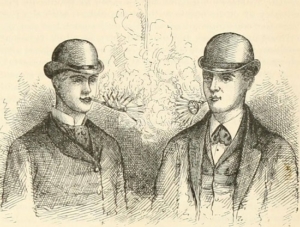 Does anything sum up English eccentricity better than rural sports of the 18th century? For, when else would you be able to race donkeys to win cheese AND competitively smoke tobacco to win a hat?

Any contest to win cheese sounds like a good time to me. However, just thinking about competitively smoking a pound of tobacco makes my lungs hurt, I don’t care how good the hat up for grabs was.

Advertisements for these rollickingly fun games,  Diversions on Tunbridge Wells Common,  were printed by Jasper Sprange in 1797. As the go-to jobbing printer in the town, Sprange printed everything from the mundane (notice for dung for sale) to the nationally important (recruitment of soldiers to fight in France).  Also worth an indignant mention is the oh-so-Georgian crime of ‘wanton destruction of a sedan chair on the common’, reward for information offered. All of these cuttings can be found in the sample albums that Sprange kept, two of which survive at Tunbridge Wells Museum. 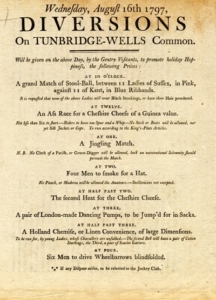 Sprange printed advertisements for these rural diversions twice a year, in August and a day after old Michaelmas (11th October.) He also created posters for similar events happening in nearby Tonbridge and Penshurst between 1796 and 1801.

The diversions offered an intriguing variety of long forgotten sports with socially prescriptive rules governing participation. The ‘jingling match’ ( a game in which blindfolded players try to catch one not blindfolded player who keeps jingling a bell) was not open to serious people such as parish clerks or grave diggers, for fear their solemnity would spoil the fun.

A race where young women competed to win a prize of a fine ‘Holland smock’ or chemise was only open to those of ‘good repute’. The idea of girls racing for a smock was just too saucy for the urban observer and was mercilessly satirised in both prose and print.

“Some years ago I saw a female race;

the prize, a shift–a Holland shift, I ween:

Rush’d for the precious Prize along the Green.” 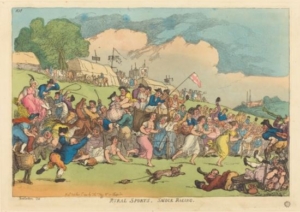 In this above print by Thomas Rowlandson, 1811, the prize of the smock can be seen hoisted into the air towards the back of the common. Also seen: fighting, drinking, and a generally bawdy Georgian crowd.

While researching these rural sports, I found out that Stool-ball is still a game played in Sussex (it’s a bit like cricket) and I’m absolutely overjoyed to find out that competitive gurning through a horse collar is still going strong at Egremont Crab Fair in Cumbria for nearly 800 years. I feel that bizarre old English sports could become a new area of interest. They offer a glimpse into what people did for fun, and are infinitely more palatable than other Georgian pastimes of watching blood sports and attending public executions.