Spa Valley Railway is a heritage railway which encompasses steam and heritage diesels and every December we have a visit from Santa which is very exciting for everyone. 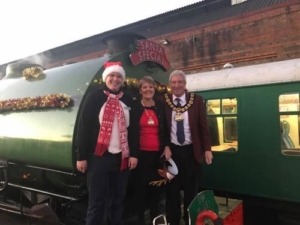 Many weeks before, Santa arranges for a delivery of the presents he is going to give to the children and then our elves (as we subcontract) have to wrap them up for him and put them into sacks. Now no one is complaining but you would think that his dispatch department would be a bit more organised. One year, we even managed to rope in the mayor and mayoress!

Tunbridge Wells West station is then turned into a grotto with a large Christmas Tree and so many lights that we have to notify the substation down the road that we will be turning them on so that they can make arrangements to boost the power.

Then Santa’s spare sleigh which we store for the rest of the year, at a very favourable rate I might add, is put into place for the children to have their pictures taken together with more than a few adults who are “Just doing it for the kids”. Well that’s their excuse!

So on the first weekend of December (and some years it has been -3 degrees), Spa Valley helpers, elves and the delivery van with the mulled wine are all waiting expectantly for the man himself and he breezes up as though its mid-summer. “Cold? This is positively tropical!” he says. Well I suppose if you live at the North Pole it is, but for us mere train people it’s a bit “bracing”. 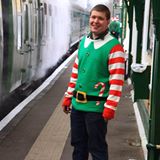 The children and their parents are positively bursting with excitement as onto the trains they go. The station master blows the whistle and off goes the first train of the Santa season.

Cries of “Let’s hope it doesn’t snow” ring out. Otherwise we will have to issue everyone with a shovel.

Ho Ho Ho, Merry Christmas, enjoy the ride one and all!