The great thing about my job is that I am never bored because no two days are ever the same. In ten years since qualifying as a Blue Badge (BB) Guide, I have guided groups where I have gone through the whole range of emotions, from extreme nervousness, laughter, empathy, irritation to sheer exhaustion after a week on the road with a group.

To guide American students, passionate about England, around St Paul’s (my favourite building in London) or Westminster Abbey is a very humbling experience – we can take our heritage for granted.

Most of my tours now are walking ones, around London, and Tunbridge Wells, where I am one of the BB guides on the pre-booked Pantiles Group walks.

To engage with visitors as we walk around, is to me, one of the great joys of the job. How else would I have found out about the Barnardo’s Boy who left Tunbridge Wells in the 1920s on the scheme to send children to Canada, and then ran away from the unkind farmers he was sent to in British Columbia, stowing on a train all the way east, then became the best dog team trainer in the Northern Territory.

Or the great-granddaughter of the last driver of the ‘fly’, a small carriage which picked up passengers from the railway station at Tonbridge and brought them to the Coach and Horses Inn on the Pantiles, who had a faded sepia photo of him and the horse in front of the Inn, which exists now only as a passage on the Pantiles. 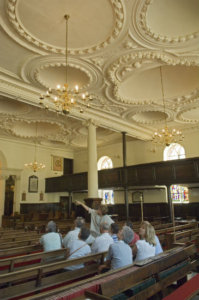 Walkers in the groups include locals, sometimes with a visiting friend, who are astonished to find the interior of the Church of King Charles the Martyr so lovely, “as we have driven past it hundreds of times but never been in”.

On Saturdays we have groups of weekenders who want the full tour but also insight on what it is like to live in the area and where they can see French films – Trinity Theatre & Arts Centre of course!

I can tell them why Tunbridge Wells has the undeserved reputation for being “disgusted” (and a couple of tales of when it genuinely was). I have several versions, but you will have to come on a tour to hear the real one, and why Punk Rock has a home here.

Local school groups are great fun. We make a Sedan Chair, stick patches on faces in the 18th century fashion, and amuse the dippers by the range of faces pulled when they have their first taste of Chalybeate Spring water. French school parties seem to think the water tastes of blood, and cannot accept that a Protestant church is not called a Temple in English!

The Royal accreditation is always a source of pride (for locals) or amusement (for Tonbridge folk who would like to point out their town is much older, and not founded on the back of a hangover!!). Queen Victoria would not be amused.

If you are interested in a guided walking tour round Royal Tunbridge Wells, contact infor@tunbridgewells.gov.uk. For further details, read Tours and Sightseeing.

All photos by Chris Parker