Town criers could well be described as “historical newscasters”, and today I bring news of events on the Pantiles, special promotions at local stores and even the arrival of Father Christmas in the town.

Dressed for the occasion

My uniform is closely based on the pattern for a gentleman’s outfit of 1750, the heyday of the Spa, the Wells near Tunbridge. 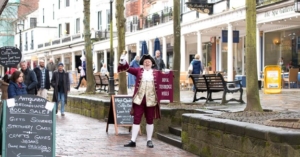 I wear breeches and cut away coat in claret, the town colour, a waistcoat of finest Chinese figured silk, hose and shiny buckled shoes set off to perfection with a tricorn hat and flowing ostrich feather.

As the Town Crier of Royal Tunbridge Wells, I cut a splendid figure with my bell and scroll, walking the streets bringing news to the good people of the town; indeed my uniform has been described as a work of art, including as it does the town crest and the arms of the Ancient and Honourable Guild of Town Criers.

It won me a ‘best dressed crier’ award at a national town crier’s championship one year. 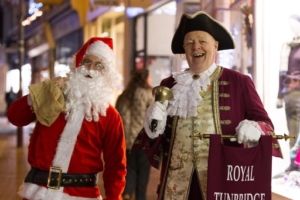 It is known that criers existed in ancient Greece, when heralds were used to announce the severing of relationships which would lead to an official proclamation of war. The herald would also be used to bear proposals of truce or armistice.

The first use of criers in the British Isles was said to date back to Norman times, when the cry “Oyez, Oyez, Oyez”, (ancient Norman French for “listen”, and possibly something stronger) was used to draw the attention of the mostly illiterate public to matters of importance.

The crier himself had to be literate, as he would need to write down his proclamation and pin it to a prominent post (the origin of the expression ‘to post a notice’).

As I am a representative of HRH Elizabeth II, all criers’ proclamations end with “God Save the Queen.”

My main proclamation today is to encourage visitors to sample the delights of our town, and goes as follows: