Anytime of year is a perfect time to get out and visit some of the exquisite gardens in full resplendence around Tunbridge Wells.

Tunbridge Wells is surrounded by a large variety of gardens of every shape and size. As well as the famous gardens like Sissinghurst Castle Garden, Great Dixter and Batemans, there are several less well known gems waiting to be discovered.

Why not make a grand tour in and around Tunbridge Wells and stay awhile? We recommend half a day for each garden at a minimum.

Pashley, in Ticehurst, on the border of East Sussex and Kent, is an ideal destination for garden lovers, art and history enthusiasts, keen photographers or those looking for a peaceful and enjoyable day out surrounded by beauty and nature.

Whenever you visit there is something to delight the senses – from bluebells, wisteria and thousands of tulips, to roses and summer produce from the kitchen garden, to delicate sweet peas and the heady scent of lilies, then colourful displays of hundreds of dahlias

Experience these magnificent gardens from 1 April to 30 September, Tuesday to Saturday, or visit during a special event. Guided tours or short talks with the owner or head gardener are available.

Enjoy ‘fabulous homemade food and warm hospitality at arguably the best garden café in the county’.

he historic walled gardens are the jewel in the crown of Penshurst Place; with records dating back to 1346, they provide a superb example of Elizabethan garden design. Visitors to the gardens will find 11 acres of garden “rooms” providing a variety of form, foliage and bloom throughout the year.

In 2016 the historic Blue and Yellow border was replanted; as well as reinstating key architectural elements and creating a new planting scheme, two new varieties of iris; “Penshurst Blue” and “Penshurst Yellow” (specially bred for Penshurst Place by Olga Wells from the Kent Iris Society) have been added to the beautiful border as part of the restoration project.

Other garden highlights are the 100 metre peony border that blooms in late May, providing a spectacular array of pinks and fuchsias for the early summer. The Orchard, and newly restored Rose Garden are also not to be missed, showing a variety of plant life and colour throughout the season.

Surrounding the formal gardens is the ancient historic parkland of the Penshurst Place estate, which features a rich mix of landscapes, habitats and wildlife.

The Garden Restaurant and Porcupine Café serve refreshments perfect for lunch or tea.

There are six gardens that have been created over the generations. From 1674 horticulturalist and famous diarist John Evelyn helped owner Philip Packer design these “outside rooms”.  The concept was to cloud the indoor / outdoor boundary, a theme which has arguably become popular again today!  The favourite of Packer is the Secret Garden, where he died sitting peaceably reading a book.

The Knot Garden has a rich display of tulips in April.  The White Rose Garden rejoices in the art of blooms in different shades of white; with more than twenty varieties of rose.

The Oriental Garden is alive with fiery colours in the shade of majestic Japanese maples.

The Drunken Garden features veronica, clematis, ceanothus and lilies in a theme of blue and yellow.

The Peacock Bistro serves hot and cold lunches and cream teas throughout the day.

Easily reached by steam or diesel locomotive on the Spa Valley Railway, make it a grand old fashioned day

Near the idyllic village of Rolvenden and the enchanting medieval town of Cranbrook, lies Hole Park Gardens. Previously featured in The Daily Telegraph as one of the best places to see bluebells in England!

An attractive 15 acre garden, Hole Park is described as a hidden gem of the Weald.

Hole Park has been owned (and still is) by the Barham family for the past four generations. The alluring gardens possess a vast panorama over 200 acres of parkland, hills, woods and fields of the surrounding pretty countryside. An expert combination of formality and naturalistic planting with colour bursting forth through all the four English seasons.

In spring, come and revel in the superlative indigo bluebell haze, as well as daffodils, camellias, wisteria and magnolia to mention just a few.

In summer, the herbaceous borders are crammed with colour and the exotic border comes alive later in the summer.

The woodlands and gardens continue to delight in autumn as trees established for their autumn colour present their ardent twilight dress.

Homemade tea and lunches are available in the Coach House.

Take a look at our interactive Garden Tour of Tunbridge Wells below as a suggested itinerary. Click on the icons at the bottom. Zoom around in the map and click on the circles for more detail on the attractions. 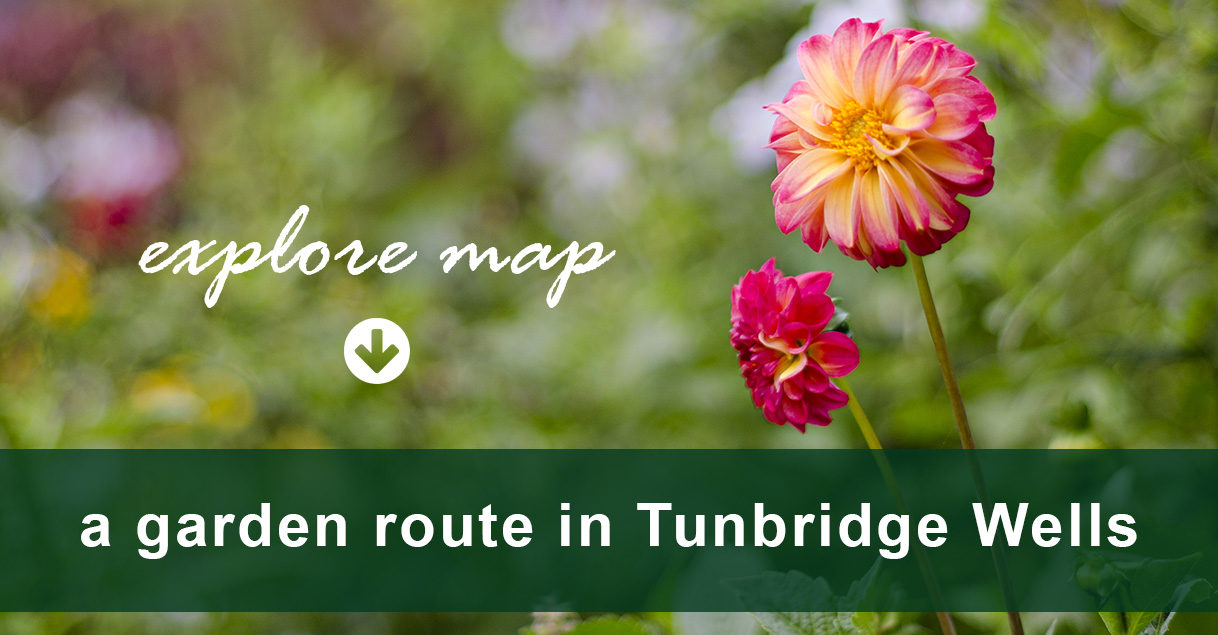 You can add your own photos too by clicking on Participate!

Situated north west of Rye in the village of Northiam, this medieval house is surrounded by its glorious gardens. It was purchased in 1910 by Christopher Lloyd’s father, who commissioned the designer, Sir Edwin Lutyens to restore and enlarge the property and design the gardens.

Garden expert and gardening writer Lloyd, spent his childhood at the family home and returned there after a brief time away experimenting in new ways of gardening and planting.

The garden that he created is full of colour, with blankets of meadow flowers and bulbs and early purple orchids in the orchard. The Long Border is a spectacular mixture of climbers, annuals, perennials and shrubs reflecting Lloyd’s unconventional determination to combine colours to “exuberant” effect.

The exotic garden is a riot of vibrant tropical colours and shapes. The borders in the High Garden are planted with oriental poppies and lupins alongside vegetables.

Light refreshments, hot and cold drinks are available all day in the Loggia kiosk.

In the rural backdrop of Sandhurst and Hawkhurst, Merriments is only a half hour drive from Royal Tunbridge Wells.

Each season has its highlights. Highlights include a wildlife garden with bird hide, gravel garden, formal potager garden with rill, two ponds and a verdant bog garden complete with deck walkway.

A welcoming tearoom serves home-made lunches and teas and there is well stocked nursery. Merriments featured in the Daily Mail’s “20 Enchanting Gardens So You MUST Visit” guide!

With a splendid history of horticulture since 1842, these delightful gardens are particularly attractive right through spring when the magnificent displays of bluebells are in full bloom, quickly followed by a vast array of specimen rhododendron and azaleas.

The scented Rose Walk is planted with roses of every colour and provides striking visuals throughout the summer.

The Walled Garden is the inspiration for the Garden’s name. It has “Himalayan inspired grass-sculpted terraces” as well as a large pond and formal vegetable garden. This has only been open to the public since 2013.

Near to Sevenoaks, learn about Riverhills fascinating history, its links to Darwin and the Great Plant Hunters. And, see the incredibly far reaching views over the Weald of Kent too.

Visit the Riverhill Café for home cooked food using local ingredients and produce from the gardens.

These 7 acres of lovely gardens, that surround a 17th century manor, house are teeming with colour and interest all year round.

Often grouped companionably together, the magnolia, azalea and rhododendrons provide a vibrant display. Then follows the collection of Mediterranean plants in the Italian garden which flower throughout the summer, including the largest collection of salvias in Europe.

A variety of ornamental grasses intersperse the colourful borders offsetting the myriad hues of late autumn.

Dotted around the gardens are a series of seats surrounded by perfumed flowers and shrubs that invite you to sit and linger as you contemplate the gardens.

The Old Dairy tearooms are open for morning coffee and homemade lunches and teas. Only 30 minutes’ drive North of Tunbridge Wells, near Sevenoaks.

Round up of the National Trust Gardens

This picturesque garden with the old castle ruins at the centre has made marvellous use of the unrefined planting of dazzling rhododendrons, azalea, magnolia, and Japanese maples.  Wisteria and old English roses scramble over the sandstone castle walls.

The moat is awash with water lilies whilst the banks of the moat provide a home for moisture loving plants.

These renowned gardens – a series of outdoor ‘rooms’ set around a moated Tudor manor – were created by novelist and poet Vita Sackville-West and her husband, writer and diplomat Harold Nicholson, in the 1930s.

The old walls and scattered buildings were used as a framework for the gardens with their colourful floral displays. They are much emulated and continue to inspire gardeners today.

Spring is spectacular with an abundance of bulbs of all colours; the beauty of the famous white garden comes into its own in the summer together with the glorious scent from the old varieties of shrub roses. The cottage garden is awash with plants of flamboyant colour consisting of fiery reds, oranges and brilliant yellows.

Capability Brown planned these gardens for the Earl of Sheffield in 1776 and they were further developed in the early 20th century.

In spring the drifts of daffodils and bluebells are followed by rhododendrons and azaleas with their bright hues.

The four lakes of this garden are surrounded by impressive trees and shrubs that crowd the banks of the lakes. In the summer the lakes are adorned with elegant water lilies in pink, white and yellow.

In the autumn the spectacular maples, scarlet oaks and a variety of other trees explode into colour.

These stunning gardens and surrounding parkland are a place of beauty and hidden delight in all seasons.

The spirit of the Edwardian period pervades these tranquil gardens that surround the 17th century Wealden ironmaster’s house, bought by the author and poet Rudyard Kipling. The attractive garden in which he took so much delight remains much as it was in his time.

The gardens are a mixture of formal and informal styles with a rose garden with flagged paths, orchard, and walled kitchen garden bound by a herb border.

Elements of the great writer’s original plans include the formal lawns surrounding a reflecting pool and the sheltered Mulberry Garden. The grassy meadows lead to a watermill and farmland walks.

The garden and surrounding countryside inspired his stories and poems, especially Puck of Pook’s Hill and Rewards and Fairies.

When Ludwig Messel bought the 600 acre estate in 1890 then began the creation of one of the most important gardens in horticulture.

Partially destroyed by fire in the 1940’s, the remaining house and ruins are covered with climbing plants such as clematis and wisteria.

Messel started to restore the walled gardens where the summer borders are a riot of annual and perennial colour. He used many new plants from South America and was happily involved in cultivating new breeds.

The rose garden was restored in 1987 and planted with more than 150 old fashioned roses. The scent of the roses lets you know that summer is really here.

The garden is at its peak in the summer and is followed in the autumn by the magnificent colour of the natural woodland.

With so many gardens to discover and explore you will need to stay awhile. Look for somewhere to stay with crisp sheets and soft pillows in our accommodation pages.

There is a map in the Miniguide detailing the location of many of the above which can be found on the Maps page.